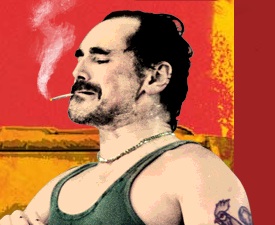 I have just recently seen this amazing play by Jez Butterworth in the run up to the Tony’s where it is nominated for six awards. I believe there were some small alterations to the script for the American audience of this very English play with very English issues and yet they were nevertheless, laughing until they were crying.

Mark Rylance plays Johnny ‘Rooster’ Byron and if this man doesn’t receive his Tony I don’t know what an actor has to do. It is an outstanding performance. A mesmerizing tour de force where he limps, arm wrestles, swears, klaxons, and beats his presence on to you. Rooster is either the greatest bullshitter or the most eloquent myth maker. And that’s part of the beauty of Jerusalem. It’s a play that has many layers, touches on and implies many issues but is never so blunt as to spoon feed or openly explain. You have to work for your understanding and interpretation. A friend of my daughter’s went to see it and afterwords said that it was the best play he’d ever seen, but would now have to go away and try and understand why.

The supporting characters are an oddball mix, led by the beautifully desperate and fragile Ginger (Mackenzie Crook) and ranged from the xenophobic Davey (Danny Kirrane)  to the gorgeously lost and wandering Professor (Alan David) who expounds relentlessly on English folk lore; the shocking entrance of Troy Whitworth (Barry Sloane) to the brisk, officious pronunciations of the Kennet and Avon Council via Parsons and Fawcett (Harvey Robinson, Sarah Moyle), and not forgetting the wonderfully touching dance solo performed by Wesley (Max Baker).

Fortunately, Jerusalem is returning to London in the autumn and I am determined to see it at home this time. (The last run was completely sold out – I think you had to sleep in the streets to get a ticket) And I will see it with the original script (no references to Mr Trump) and a completely English cast. That was my one gripe – that Lee (John Gallagher Jr) didn’t quite fit. I couldn’t have cared less if he left for Australia or New Zealand or wherever. His character left me wondering what a real actor could have done with the part as everyone else demonstrated something he didn’t; that they had depth of character, a believable history and that they all could have walked in England’s green and pleasant land.

Update – He got the Tony!