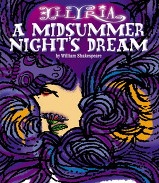 I was convinced it would not rain. We’ve had the hottest

weather in years and the cloud cover was moving relatively quickly so rain should not have been an issue. And it wasn’t in the first half. We had the odd smattering and so were told we had one minute to get our brollies up as we wouldn’t want to miss this next bit! Bottom demonstrating the power of his roar. And let’s face it, Bottom’s roar is always a highlight.

They rip through the script at an amazing pace, always clear and with plenty of space for innuendo and slap stick. Hermia was blowing smoke out of the ears at one point. We loved it. And there were plenty of us, tables, chairs, chandeliers, boaters, blazers and all the other accoutrement. Those who brought rugs where privileged to be seated at the front – we were in that category although we were on black plastic bags – not quite the same class. Nevertheless, we were close enough to catch Helena’s head as it was kicked into touch by a steaming Hermia (Lizzie Dive or was that Ivy Dizzle, Zed Zilivy?) This prompted a request as to whether there was a doctor in the house. She recovered herself quickly enough however, and we raced on to the second half.

When it pelted down. All we lacked was the thunder and lightning. The noise was deafening. They had to really shout to be heard, and costumes where getting soggier. I felt very cosy on my black plastic bag sitting under my broken umbrella, hugging my cushion.
But they played on, as they do, with as much gusto as ever. It was a wonderful performance. And A Midsummer Night’s Dream is still one of my favourites.