I was very excited to escape on a trip down to London and take part in a bookbinding course at the British Library.

I’m ashamed to say that I had never been to the British Library before this, it being so close to Euston Station, my first port of call when in London. We were in the Harry M Weinrebe Learning Centre where workshops are held, and our two days were led by Shelagh McCarthy, a regular at leading workshops at both the British Library and other London Institutions including the British Museum, Battersea Arts Centre and The Guardian Education Centre.

The object of the course was to give us a taster of the skills needed to make books. We learned about how books are made, their different structures, the terminology, grain of paper and its importance, all through constructing a range of different types of books.

We started with a simple pamphlet, moved on to concertina books, Japanese Stab bindings, a simple coptic style book, and on the Sunday a full casement bound book. And within all this we were also privileged to visit parts of the conservation centre and talk to one of the many conservation experts working there. So, a very busy weekend!

It was such an inspiring trip. I managed to get round to the open-to-the-public exhibition and found at this time they had one of Shakespeare’s first folios on display in amongst so many other priceless works. 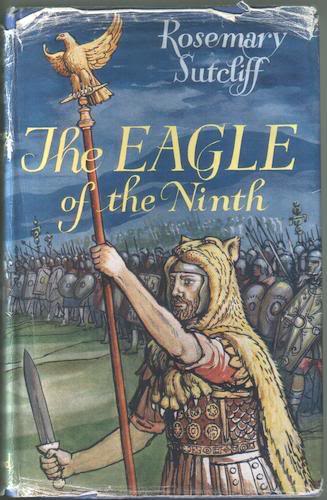 Delighted to hear that there’s going to be a film made of the Rosemary Sutcliff book, The Eagle of the the Ninth. I remember being totally hooked by this when I first read it – I can’t remember how old I was, early teans?

I’ve lost my original book so I’m buying it again before the film come out in Feb 2011.
This old video clip gives an idea of the book’s themes.