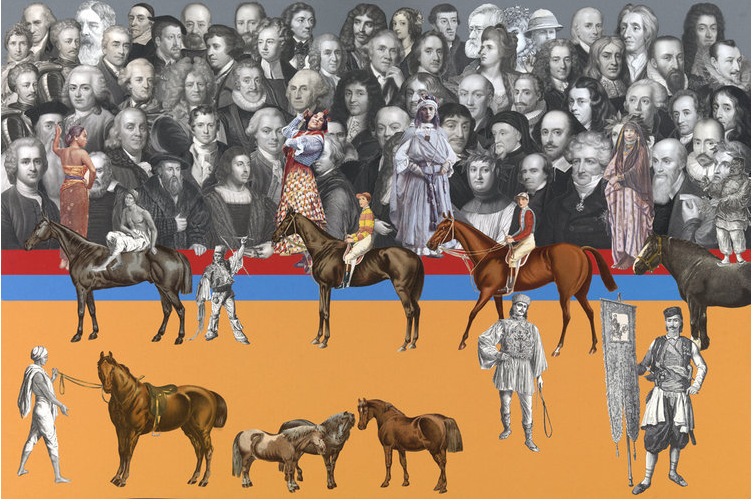 This is quite a coo for Gallery 49, in Bridlington. The whole space will be devoted to  signed limited edition prints by Sir Peter Blake and other RA friends.

Peter Blake is perhaps most famous for his collage work and especially the cover he made for the Beatles’ ‘Sgt Pepper’s Lonely Hearts Club Band’. But he had hit the Pop Art scene long before that, emerging in the 1950s and becoming one of the best known Pop Artists by the early 60’s exhibiting along side David Hockney and R.B. Kitaj. At that time he sourced images from advertisements and music hall entertainment and was always interested in the juxtaposition of collage and use of popular images with fine art.

“from about 1954 I realised that I could paint the subjects I liked such as wrestlers and strippers and the rest of it. I was also aware of Jasper Johns and Robert Rauschenberg in America who anticipated Warhol and Lichtenstein and I definitely based some collages on their work.” Warhol himself, he says, was less influential. “I’d already started by the time I came across him. I’d made this thing with Captain Webb matchboxes which he couldn’t possibly have seen but it did anticipate his soup boxes. Things seemed to be happening at the same time although we wouldn’t have known what the other was doing.”

Of course, later on in the 60s his most famous creation, led him to be forever in the minds everyone with the iconic creation of Sgt Pepper. Collage as an art form has never looked back.

Blake has continued to develop links with the music world with further Album covers for The Who, Band Aid, Paul Weller, and Ian Dury. (Blake had been Dury’s tutor at the Royal College of Art in the mid-60s)

His focus shifted to mythical elements of English folk lore for a short time  – his ‘Ruralist’ period – but then returned to his more populist roots, again linking with the music industry and covers for Oasis but also the Young British Artists such as Damian Hurst and Tracey Emin.

More recently, he made a reworking of Sgt Pepper with famous figures from Liverpool’s history, as a promotion for Liverpool’s successful bid for the title of European Capital of Culture 2008.

Blake has said that, “I have this analogy of a tree. The branches are all my collages and collections, graphics, printmaking. But the trunk is painting.” He has turned his attention now to painting, or ‘big painting’ as he puts it.

Nevertheless, all of those collages, collections, graphics and making of prints still feed his imagination and in this exhibition he returns with an interesting collection of prints along with his others from the RA such as Sir Terry Frost, Barbara Rae, John Piper, Bruce McLean and Donald Hamilton Fraser.