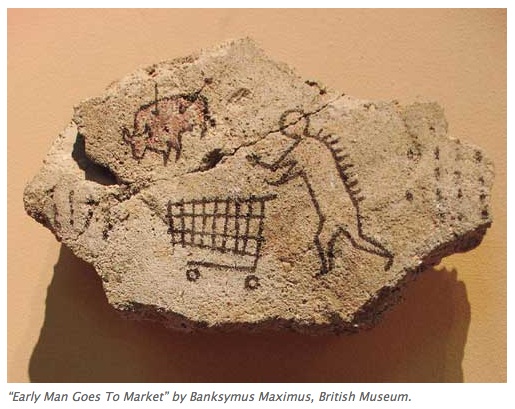 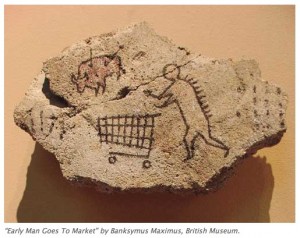 If you’ve seen Banksy’s book, Wall and Piece, you will have witnessed several examples of Banksy’s art being surreptitiously placed on the walls of famous galleries and museums.

This example, ‘Early Man Goes To Market’  appeared in The British Museum in 2005 and was completely overlooked until Banksy pointed it out on his website. All credit to the Museum staff for recognising man’s need for making marks and it being seen by the largest possible audience. It is now in their permanent collection.

I’m sure this drew a wry smile from the artist himself.

I wonder if the recent reversal of fortunes of Banksy’s work from Art Republic did the same. Probably did. Two Banksy prints were stolen by a man and woman from the shop in central London. And this is not the first time this has happened with Art Republic. Apparently, 10 prints were stolen from  the same company, only in Brighton. Tut, tut, Art Republic – very clumsy. 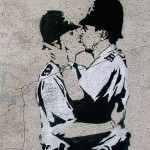 The police, who of course adore Banksy’s work, are investigating  and are hard on the heals of the culprits, issuing these telling images of the couple they wish to question. 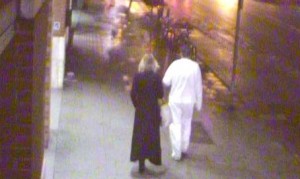 This is all so gloriously ironic.

The two pieces taken were limited edition framed prints worth £16000. One is called “Happy Choppers,”

And so it goes on.

Here is another ludicrous incantation ….