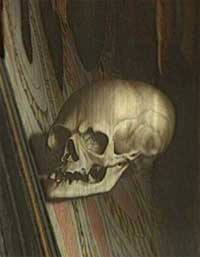 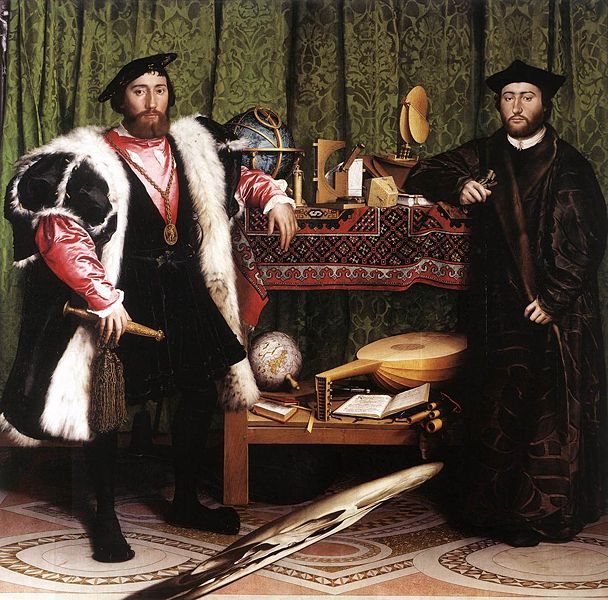 Hans Holbein (the younger) was a man for gadgets and symbolism, and such a subject as requested by de Dinteville, must surely have been God sent – in more ways than one. How many messages and hints can you cram into a seemingly simple portrait? Two men, eager to demonstrate their wealth, learning, statesmanship and prowess, flanking an unusually high table on which are displayed all the latest high tech gizmos: items for telling the time, a terrestrial globe (which also indicates the location of de Dinteville’s chateau – where the painting would hang), a book on arithmetic conveniently left open on a page entitled “Dividirt” (divide) alluding to the various forms of political and religious division in Europe at that time. 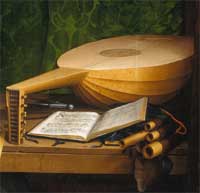 There is also a lute, normally a symbol of harmony, with a broken string, next to a text revealing the Ten Commandments interestingly translated into German by Martin Luther (first published in 1529).  This is all hot off the press stuff. The expensive celestial globe, made of brass and embellished with starry constellations, reflects the skies of 12th July in Rome’s latitude, not London’s. Henry was excommunicated from the Holy Roman Church by Pope Clement on 1st of that month. Interesting, isn’t it?

But of course the most famous detail is the slash of the skull across the center foreground. Why? He must have been showing off, knowing that this painting was going to be seen by some of the most influential wheeler-dealers of the age. The skull is a symbol frequently used to indicate mortality, how long we have on this mortal coil. From Medieval time onwards, they tell an illiterate audience that the crucifixion took place in Golgotha, the hill outside Jerusalem. But here its use is mystifying. It’s so out of place with the rest of the scene. Is it a cry for science and new ideas?

In order to paint in the detail that he did, with such photographic precision, did Holbein use his own state of the art technology, the camera obscura, with the crafty use of lenses? The foreshortening and mathematical contrivances that went into creating this anamorphosis causes audiences to wander back and forth trying to ‘get it’. I have to admit that I did guide some poor souls to the position they needed to be at in order to ‘see’ the skull. The painting is hung on the equivalent of a chimney-breast, and this is so that you can walk to a line along side the painting and stare at it from the side. Right side’s best.

But despite all the intellectual wealth and science on display through the subjects and the technical virtuosity of the artist, there’s that little detail, almost hidden behind the edge of the richly embroidered curtain. It’s probably the most intriguing revelation. When one of your star subjects is a bishop, experienced diplomat known for his views on reforming the Roman Catholic Church, why hide a little crucifix? These men are bound to spot it. Aren’t they? So, is this a sneaky declaration of Holbein’s, or is it done with their approval inferring that the Catholic church is being deliberately pushed to one side?

One thought on “The Mysterious Ambassadors”