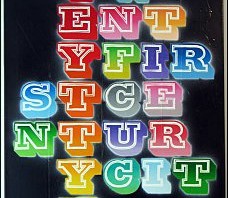 Much comment has been made about the appropriateness of gifts between state leaders. Poor president Obama’s department got it so wrong with the lovely Mr Brown, that the sequel was being scrutinised with much interest. And low, it was modern art that won out. 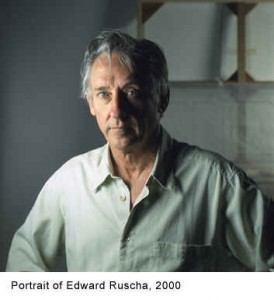 I’m quite pleased about that. There’s always the risk that someone will play it safe with an older, classic  piece by a more established name and then the ‘gift with value’ card will have  been seen to be played. (a bit like Mr Brown’s very politically correct Victorian timbers from an anti-slavery ship, pen holder). But dealing the modern art card is definitely more peppy, risky and shows a good deal of faith in the value of modern artists. Obama gave Cameron a signed colour lithograph by American artist Ed Ruscha, one of leaders of the Pop art movement. The piece, “Column With Speed Lines,” was selected for the red, white and blue colors matching both countries’ flags. Hmmm, symbolism laid on with a trowel.

The Pop Art link with Ruscha is an astute  choice – he’s not one of the massive names of the Pop Art movement. However, he has has been around from the start, having exhibited with the likes of Warhol, Lichtenstein, etc in the historically important and ground-breaking “New Painting of Common Objects,”exhibition first acknowledged as the beginnings of the Pop Art movement in the US.

On the other hand, Cameron’s gift shows a surprising savvyness that is very up to the moment. His choice, well his wife’s,  is a piece by Graffiti artist Ben Eine valued at less than the Ruscha but worth a hell of a lot more in street cred. A conservative leader promoting a known graffiti artist!? Who has a criminal record!? Eine admits to being a hardcore part of that ‘hooded tracksuit gang thing’. And having been arrested 15 or 20 times, with a close escape from prison.

Nevertheless, the piece, although reflective of Eine’s obsession for lettering, doesn’t have the satirical or political edge that other graffiti (or as Eine himself and other similar artists are beginning to be called – Street Artists) have.  So it wasn’t a dangerous choice in that sense. It’s certainly a clever title and theme. It reminds me of Jasper Johns – but not as sloppy!