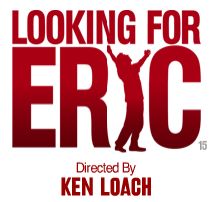 Looking for Eric – what a gem. I loved this film. It’s beautifully crafted. I don’t know how they catch people reacting to each other so naturally. The central character is the most unlikely hero. He’s certainly not your Alfa Male, but he’s just lovely and he has your sympathy right from the start. I was so frustrated for him with his break down, thoughtless step lads and that shabby, and my god it was shabby, house.

There’s not much going for him. And he just continues to sink further into his own despair, despite the best of efforts from the most inept bunch of mates. It takes a lot of self-talk in the form of a philosophical Cantona and a number of spliffs, which must help free the mind, before things do start to turn around.

It’s wonderfully gritty and yet it’s characters never step beyond the boundaries of being gentlemen – even when dealing with the local psychopath.

If you haven’t already, you need to go Looking for Eric.